Joseph Henry Sharp (27 September 1859 – 29 August 1953) lived a long life and had a prolific career as a painter best known for his realistic portrayal of the American Indians.  However, recent writing illuminates his significant body of work of still life painting as well.

Sharp was born in Bridgeport, Ohio to Irish immigrant parents. When he was 12 years old he almost drowned playing the game “skinning the cat”. He got a serious ear infection, which resulted in his complete and permanent hearing loss. His mother recognized his career limitations and his heightened aesthetic awareness and sent him the McMicken School of Design. Eventually, in 1881, like many of  his contemporaries, Sharp went to Europe to study art.  At The Academy of Fine Arts in Antwerp, he participated in academic competitions called concours and placed highest in the drawing class known as the Antiek, after which he was “allowed” to study painting.

He returned to Cincinnati in the fall of 1882 where he had a studio in the same building as Henry Farny. Although Farny discouraged him from painting the American Indian, the idea fascinated Sharp. In the spring of 1883 he made his first trip out west. In June of 1885, he returned to Europe with fellow artist, John Hauser, and in October of 1886, he enrolled in the Royal Academy of Munich. It was there, and subsequently under the tutelage of Frank Duveneck, that he began painting portraits and learned to paint flesh tones. In Munich he studied the technique of direct painting, wet on wet, blending brushstrokes together to create a richly fluid appearance. Sharp went on to paint with Duveneck in the Prado and the Alhambra in Spain, and also in Italy.

In the early 1890s he went to Paris to study at the Académie Julian where he was influenced both by the Barbizon painters and the Impressionists. During his European studies he was exposed to plein air painting, the accurate utilization of light and shadow, and the rendering of broad brushstrokes.

Upon his return to the States, he taught at the Cincinnati Art Academy and made a living doing portraits of prominent citizens. He met Addie Byram at a function at the Cincinnati Art Club and married her in 1892. In 1897, he began to spend summers in Santa Fe and Taos and by 1899 to spend winters at Crow Agency in Montana.  Addie’s failing health necessitated their spending winters in Pasadena in lieu of Crow.  In April 1913, Addie passed away and two years later Sharp married her sister, Louise. Sharp wrote to his friend J.H. Gest “Louise and I talk of her all the time, so that I often feel we will see her again.”

The Artist and His Patrons
At the turn of the century, Sharp began to make a living solely from pursuing his subject matter of choice. His first major patron was iron-steel industrialist Joseph G. Butler of Youngstown, OH. From 1899 – 1906, Butler acquired more than 40 Sharp Indian portraits and one oil sketch of a Crow camp. In 1901, W.H. Holmes of the Smithsonian purchased eleven Sharp’s Indian portraits for an exhibit at the Cosmos Club. A third prestigious patron was Phoebe Apperson Hearst who amassed over 150 of his works between 1901-1919.  In 1945 at the age of 86, Sharp was blessed with another major patron. Thomas Gilcrease purchased many of his paintings, much of his personal collection of Indian relics and his memorabilia. Today, the Gilcrease Institute provides the most complete survey of his long and prolific painting career

Alois Liebert, who for 35 years served as Sharp’s companion, friend, handyman, agent, chauffeur and secretary, said, “I was with him everywhere he painted while in Taos…I have always said no finer Person was ever born—and that when he was made the mold was cast away—to me he was my friend. Father—and a Prince of a man. I shall long miss him.” 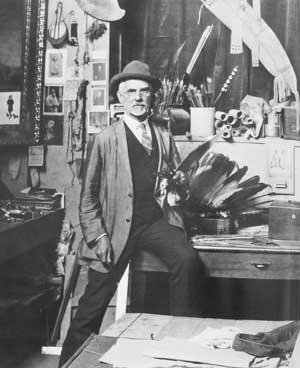