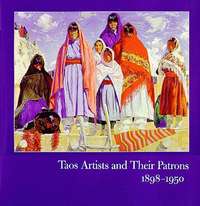 The northern New Mexico village of Taos, shaped through the centuries by American Indian and Hispanic Catholic cultures, is an unusual setting for a study of art patronage. Yet nowhere did relationships between artists and patrons play a more pivotal role in American artists' survival during the first half of the twentieth century. Why did artists go to Taos? What held them there? How did they attract patrons? What unusual challenges faced artists who lived and worked in Taos, and how did they respond to these challenges?

Taos Artists and Their Patrons examines age-old dilemmas facing artists in the early years of the Taos art colony: how to make art and still manage to pay the bills, and how to attract emotional support that often made the difference between success and failure; and discusses how patrons in many guises,from corporate and governmental programs, to wealthy collectors and loyal family members, offered innovative solutions to these predicaments.

In addition to art colony founders and the academically trained artists who joined them, the book includes later arrivals, such as modernists Andrew Dasburg, John Marin, Georgia O'Keeffe, and Dorothy Brett, who followed Mabel Dodge Luhan to Taos. This is an essential reference work for scholars and collectors of New Mexico art.

Out of print for many years, it has been available recently only in used copies. Thanks to a generous donation from J.N. Bartfield Galleries, The Couse Foundation is now in possession of a number of brand-new first editions of this essential volume.

Dean Porter is Director Emeritus of the Snite Museum of Art located at the University of Notre Dame. Dr. Porter is a historian and specialist on the Taos Society of Artists with a special focus on Walter Ufer and Victor Higgins, and a member of The Couse Foundation advisory board.