Taos Pueblo Portraiture: The Photographic Studies of E. I. Couse 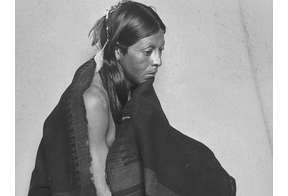 Showcasing contact prints made by Couse from his photos of Taos Pueblo models, chosen from the 8,000-plus negatives in The Couse Foundation archive, the resulting stunning images are windows into his artistic process and into the life of Taos people in the early 20th century.

Couse was one of the founders of the Taos Society of Artists (TSA) in 1915. The featured prints are from 1906-1928 and most were taken as studies to use in developing the compositions for his paintings. The exhibit selection represents the quality of these images and provides insight into how the artist used them for his work.

Couse bought his first camera in France in the early 1890s and thereafter used it extensively. He built a darkroom into the corner of his Taos studio, where he processed his films and prints without running water or electricity. Some of the artist's cameras and other equipment are in the exhibition; visitors can see the darkroom itself during tours and open houses as well.

The primary use of these studies was to capture the pose of the model, which could then be transferred to the canvas by means of a grid. Although these photographs did not document real life, they provided natural poses and environments for paintings in which Couse attempted to represent the inner spirit of Native people performing everyday activities.

“Couse’s use of the camera was primarily utilitarian, and his interest in photography as an art form in its own right appears to have been minimal,” said his granddaughter, art historian Virginia Couse Leavitt. “The results he obtained, however, were far from pedestrian. Because the artist’s eye prevailed, most of his photos are compelling images.”

She notes that the survival of the painter’s extensive archive of negatives and prints provides a rare opportunity to study his process. “It clearly reveals the part photography played, acting as an aid to memory, allowing him to capture the subtle nuances of a pose, and providing a source of fresh inspiration and new compositions,” Leavitt explained.

The archive is emblematic of the nearly unique treasure trove represented by the Couse-Sharp Historic Site. The organization possesses not only a complete set of Couse’s negatives and prints, but the equipment used to make them, the clothing worn by the models, Native pottery and artifacts used in the compositions, preliminary sketches, the artist’s brushes and other tools, even sales records and correspondence pertaining to the finished paintings.

The exhibition, which includes 27 contact prints made by Couse himself, six beautiful modern prints, and objects and archival material associated with the photos, will run July 6 through November 2, 2019. Besides the First Saturday 3-5 p.m. open house each month from July through October, the show can be seen during the full docent tour of the historic site. Tours are available by appointment only; click here for more information.