The historic Site includes not only the home and studio of E.I. Couse, but the garden designed by his wife, Virginia, the workshops of his son, Kibbey, and the two studios of his neighbor and fellow artist, Joseph Henry Sharp. The Site also reflects the contributions of a long history of previous owners.

The Site sits on an escarpment that originally defined the defensive nature of Old Spanish Taos. Occupation of the site began when Juan de Luna built a family chapel there about 1835. Although the Luna chapel remained a separate property, Pedro Luna built a small house against the chapel's south wall in 1839. Various owners added to Pedro's house over the years, and when the Couses purchased it in 1909, it had grown to seven rooms. The artist immediately added a large studio to the existing structure and his wife began to carve a garden into the barren hillside.

The Couses continued to make significant changes and additions throughout their lifetime. After his mother's death in late 1929, their son Kibbey returned to Taos to care for his widowed father. He converted the family garage into a machine shop and added another building to the south, where he planned to manufacture his invention, the Couse Mobile Machine Shop. With his father's death in 1936, his plans changed and he built his factory in New Jersey. No significant changes were made to the Site or its contents after that time.

J.H. Sharp purchased an old adobe house on the adjacent property in 1908.  He acquired the Luna chapel from the Diocese in Santa Fe in 1909 and converted it into a studio.  He later purchased land to the south of his house on which he built a larger studio in 1915.

The Couse family acquired the Sharp property after his death in 1953.  His house no longer exists but his first studio, the Luna chapel, and his second studio are a significant part of the Historic Site. 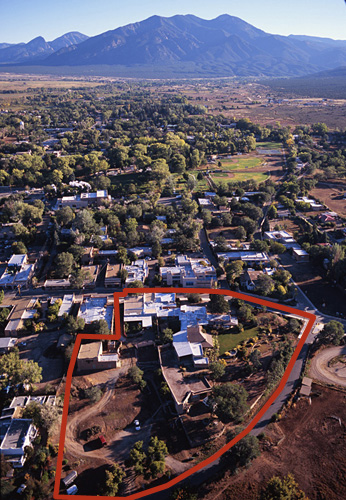